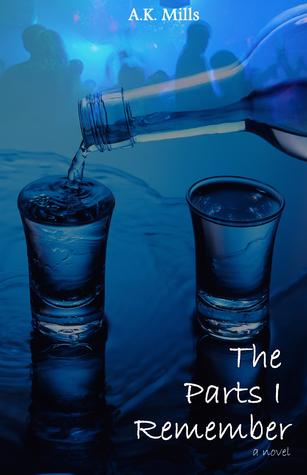 Notes: This novel was given to me from the author for an honest review.

Welcome to Kelly Rockport’s existence at Haysville University, where responsibility is just an elective. After all, fake IDs, alter egos, and one-night stands are all part of the college experience, right? So what if she blacks out from time to time? Memory is overrated.

When freshman year lasts about as long as a one-night stand and is quickly followed by the Year of the Blackout, Kelly projects junior year to be nothing shy of amazing. But as shots, beer, cocaine and men mesh together in an intoxicating haze, Kelly’s reckless ways get her into serious trouble. The only problem is, she can't remember what happened.

As she hovers along the edge of consciousness, Kelly forces herself to think past her pain to piece together the shards of her life. This is her story, told in her words: The Parts I Remember.

MY REVIEW
The Parts I Remember starts off with Kelly entering college with the Dean stating that one in three do not finish their college education. Of course being freshman, Kelly and the other freshman laugh this off. You watch Kelly get into the party scene, and sleep with random guys.

Things start to get out of control for Kelly when she hits  her junior year. Shots are being done constantly and the experiment with hard drugs come into play. Her sister and her boyfriend don't buy into Kelly's act of partying which puts a thorn in their relationship.

Tragedy strikes towards the end of the book, and we see where Kelly's drinking and partying plays an important part and how it effects everyone.

This was my first 'new young adult', and I rather enjoyed it. While I couldn't relate to Kelly since I'm not a partier myself I did enjoy her as a character. She was likeable from the start, and kept true to herself in towards the end. You started to wonder what it was going to take to get her to change her ways.

The writing was wonderful, and I was hooked. It's a good read for those who like the party scene, but it's also a good read to show how your choices effect other people. I also liked that it wasn't preachy. Sure there is a moral to the book, but it wasn't smack in your face like some of them can be. Everything meshed perfectly. Very enjoyable.

Summary: A beautiful schoolgirl mysteriously disappears into the South African veld. Forty years later, thirteen members of the missing girl's swimming team gather at their old boarding school for a reunion, and look back to the long, dry weeks leading to Fiamma's disappearance. As teenage memories and emotions resurface, the women relive the horror of a long-buried secret. A stunning and singular tale of the passion and tribalism of adolescence, Cracks lays bare the violence that lurks in the heart of even the most innocent

MY REVIEW
Cracks is a coming of age story about a group of girls who live in a boarding school in Africa. They are all on the swim team, and queens of the school because of it. They stick to their crowd. When a new girl named Fiamma comes to school the attention the girls once received is now on her. Fiamma goes missing and the story of her disappearance begins to unfold.

This book was suggested to me by a friend to read, and I’m glad she did. While the beginning part of the story is rather slow, it does need to set up the story for the ending. I loved the characters, dialogue, and how the story as a whole was written.

Cracks is DEFINITELY not for everyone. It does deal with some tough issues with teens and while these issues do generally happen with adult male characters we get an interesting take of how these situations can happen with an adult female. I will advise if you can’t handle difficult situations, do not read the book. I would suggest the movie since it is toned down and a lot is taken out for that reason.

The only problem that I had, which I thankfully got over, was the author put herself as one of the girls. My friend pointed out that it was to tell the story from her point of view. I understood her view of why it was done, but sometimes that doesn’t always work. Thankfully in this case the author putting herself in the story worked and fit perfect with what was going on. Note: the story is a work of fiction and not a memoir. The author is just simply a character.

Summary: The future is coming...for some, sooner than others.
Ellis Rogers is an ordinary man who is about to embark on an extraordinary journey. All his life he has played it safe and done the right thing but faced with a terminal illness he’s willing to take an insane gamble. He’s built a time machine in his garage, and if it works, he’ll face a world that challenges his understanding of what it means to be human, what it takes to love, and the cost of paradise. He could find more than a cure for his illness; he might find what everyone has been searching for since time began…but only if he can survive Hollow World.

Hollow World is a story about a man named Ellis who creates a time machine because he finds out that he has a terminal illness. He takes a chance in hopes that the future holds a cure for the illness. Instead of going 200 years in the future he ends up going 2,000 years into the future. Along the way Ellis finds what it’s like to be in love, learns deceit and ultimately learns survival in a different world.
I stumbled upon Hollow World through Kickstarter, and I was intrigued by the plot line. Anything that has to do with time travel always peaks my interest, but this had a different twist to it. I am pleased that I helped supported this novel because I loved everything that there was about Hollow World. I have never read Michael’s work before, but now I will look into his previous works. I fell in love with the idea of Hollow World being a real place. It was described beautifully, and it was a place you wanted to go.

I loved the characters development through the story. Here stood Pax who only knew life before he met Ellis, but between the two of them they formed a friendship that lead to different possibilities. Every character had such depth to them even the bad guys.
Hollow World definitely isn’t for everyone because Michel does touch on some difficult subjects like God, faith, gay rights, suicide, but he does so with tact and in some ways makes you question your own self views.

Hollow World is much like the Time Machine by H.W. Wells and A Brave New World. In a lot of ways I find it better than the Time Machine which I had a hard time reading. This book kept me guessing and had the perfect plot twists to go with it. I can’t wait to see where this novel goes and hope it goes well with the support he received.

From critically acclaimed author Kate Ellison comes a heartbreaking mystery of mental illness, unspoken love, and murder. When sixteen-year-old artist Olivia Tithe is visited by the ghost of her first love, Lucas Stern, it’s only through scattered images and notes left behind that she can unravel the mystery of his death.

There’s a catch: Olivia has gone colorblind, and there’s a good chance she’s losing her mind completely—just like her mother did. How else to explain seeing (and falling in love all over again with) someone who isn’t really there?

With the murder trial looming just nine days away, Olivia must follow her heart to the truth, no matter how painful. It’s the only way she can save herself.

MY REVIEW
Notes from Ghost Town is a story about Olivia “Liver” Tithe who goes color blind in a dramatic event and also is able to see ghosts. The story starts off with you knowing that Olivia’s mother is guilty and waiting trial of the death of Olivia’s best friend and first love Lucas Stern. Olivia faces the days before the trial struggling with the idea of her best friend and first love’s death and the idea that her mom is the one who killed him because not only was she seen at the crime scene but she also confessed. It’s a lot for Olivia to swallow.

I loved Notes from Ghost Town from the start of the book to the finish of it. Olivia had her moments of being a little annoying, but who could blame her? She just lost two major people in her life, and her dad is already moving on with another woman. It’s hard for her to accept. The only thing that keeps her going is her new step sister. I loved every relationship in this book from the relationship of Lucas and Olivia, Olivia and her step sister to Olivia and the love interest that she begins to have feelings for.

The book can be a tad slow at some parts, but once you get towards the end everything falls into place perfectly. Things happen for reasons and they are set up. This is one that I will keep in my own book collection, and possibly read again.